You can help us stay independent and ad-free by tipping us via Patreon or Paypal.

Vento Seco, or Dry Wind as it’s marketed to English-speaking countries, is a likely reference to the sweltering heat of the neighborhood in which our protagonist Sandro Karnas lives in. He is a supervisor in a fertilizer plant, and has good rapport with the union representative Paula Astorga, but his love life is limited to sexual encounters on the low down with his colleague Ricardo. The latter drops hints that he’d like their relationship to be a bit more than just jiffy-wham-bam episodes, but Sandro isn’t having any of that. He’s distracted by visions of men in BDSM gear doing sexy stuff in front of him. Don’t ask me about that—there may be some kind of deeper meaning to all those scenes of lollipop-sucking and what not, but I suspect the people behind this movie just wanted to pad this movies with scenes that allow it to get some bucks out of people that normally won’t watch dramas.

Then, one day, Maicon Machado shows up on his bike. He’s been described in the publicity materials for this movie as someone out of a Tom of Finland artwork, and they’re right. In fact, I suspect the resemblance is deliberate, heh. Sandro immediately goes all stalker-creepy after that guy, spying on him in the showers of the gym and what not. Things get complicated when Maicon and Ricardo become lovers, making Sandro see red. Come on,  it’s his fault that he couldn’t walk up to Maicon and say hello like a normal person, so I don’t know why he’s so jelly.

Don’t be fooled by my synopsis into thinking that this is a coherent movie. The movie has really erratic cuts, often letting important plot developments take place off-screen and focusing instead on things like the camera panning over Maicon’s naked body as he showers. Mind you, I’m hard-pressed to say that the movie is placing its priorities on the wrong things. The opening scenes of this episode are basically close-ups on the various crotches of men in tiny swim trunks as they lounged around the pool. I’d say this movie definitely knows its priorities, and they aren’t with the plot and other silly stuff. Let’s perv on the boys!

Oh wait, did I say “boys”? This movie, as I’ve mentioned, seems intent on recreating the aesthetics of a Tom of Finland work of erotica. Sandro has more of a dad bod, with a potbelly and all, but still, hot. Maicon looks really good too, and while he doesn’t get naked or do gay stuff, Del Neto playing Maicon’s controlling older brother looks really good in leather. Hottest one, though, in my opinion, is the heavily made-up Conrado Helt, sporting plenty of fake tattoos and all, as this rugged cop that interrogates Sandro in a scene that may or may not be solely the product of his imagination. 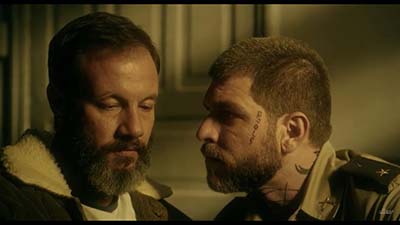 The way he sidles up to and looms over Sandro, the way he invites Sandro to caress his gun (and I do mean the gun, not the other… you know), as he talks to Sandro in this low, dangerous voice… oh my. If I were in Sandro’s shoes, I’d confess to whatever crime he accuses me of, so that he will punish me for being such a bad, bad person.

So yes, watch this movie for the nudity, the explicit sex acts (seriously, some of the scenes here are pornographic in nature), and all the hot, hairy, beefy man-meat on display. Seriously, this one is for folks that like their men to be more of Tom of Finland than twinks of K-pop Land. Does the plot even matter? Just sit back and enjoy the view.

Could it be that Lana Del Rey has finally found her authentic, true self?