We don't run ads or paid promotions here. To help us stay independent, you can tip us via Patreon or Paypal.

Casper Van Dien and Jennifer Wenger got married a few months before Alpha Wolf was vomited unto the unsuspecting public, so I can imagine this must be some kind of sick wedding present from them to the world.

We have a couple, Jack and Virginia Lupo (haw, haw), retreating to some cabin in the wilderness for some R&R only for Jack to be bitten by what seems like a big dog. Before you know it, Jack is turning into… well, this lovely thing. 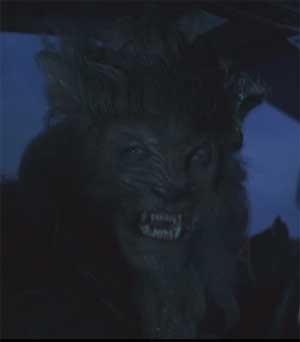 Hilariously, the family dog also turns into a human after it was bitten by a werewolf.

The problem with this movie is just how terribly underdone the whole thing is. Casper Van Dien is hamming it up a lot, but he’s no Nicolas Cage – he just ends up coming off like someone with fire ants stinging his crotch non-stop. Opposite him, Jennifer Wenger is underacting. She under-emotes all the time, and her lines may as well be delivered by a robot. Her character displays no believable fear or confusion when her husband goes all beastly like a reject from Cats. Worse, her character comes off as brain-damaged half the time, such as when she is so scared of her husband possibly having murdered a couple of boinking campers that she hammers pieces of wood across the windows to form a weak-looking barricade, only to then let her husband in through the front door as if she’d completely forgotten her fear a while later. After witnessing her husband murder a man, she acts as if Jack had merely defecated on the rug, and asked why he couldn’t be reasonably behaved. Is this character insane or just very stupid?

The plot unfurls like a bad carbon copy of the original The Howling, only with hideous special effects, minimal gore, scant nudity, and unimaginative cinematography. Seriously, there are two terribly un-erotic love scenes filmed with all the passion of a bored bag boy at the grocery check-out lane, and these love scenes both have the same position and the woman wearing the same underpants. Why even bother making this hatchet job of a movie when these people are either short of funds or passion? Is this some kind of money laundering scheme?

Whatever it is, Alpha Wolf is best avoided like the pox it is.